Knowing the difference between healthy gums vs. unhealthy gums is highly essential to making your oral care decisions. Our gums protect the roots of our teeth and our jawbones from damage and infection.

No matter how thoroughly you take care of your teeth, neglected gums can lead to oral diseases and potentially irreversible damage that would offset all that tooth care. That’s not to mention other physical diseases gum disease has been linked to, including cardiovascular disease and endocarditis. There’s no long-lasting healthy smile without healthy gums. In this blog, we hope to help you diagnose your own gum health and keep them in good shape, so they can maintain their strength as the protectors of your mouth.

Are there immediate visual differences between healthy gums vs. unhealthy gums?

There’s a spectrum when it comes to gum health, but how do you know where your gums fall? Maybe they look fairly healthy to you: pink, no sores, no loose teeth. Even if this is the case, you may still have an early-stage gum disease called gingivitis (inflammation of the gums) , which can easily go ignored. If that happens, it can advance to a severe, irreversible gum disease: periodontitis. These gum diseases are generally caused by the bacteria in dental plaque, which, when allowed to build, can elicit an inflammatory response that causes mild to severe symptoms.

There’s a few immediate indicators that can help you discern between actually healthy gums vs. gum disease. Below is a picture of a healthy set, followed by a picture of gums with gingivitis. Hopefully these pictures of healthy vs. unhealthy gums can help you with an immediate diagnosis, so you can learn later in this blog which steps to follow in repairing gum health. 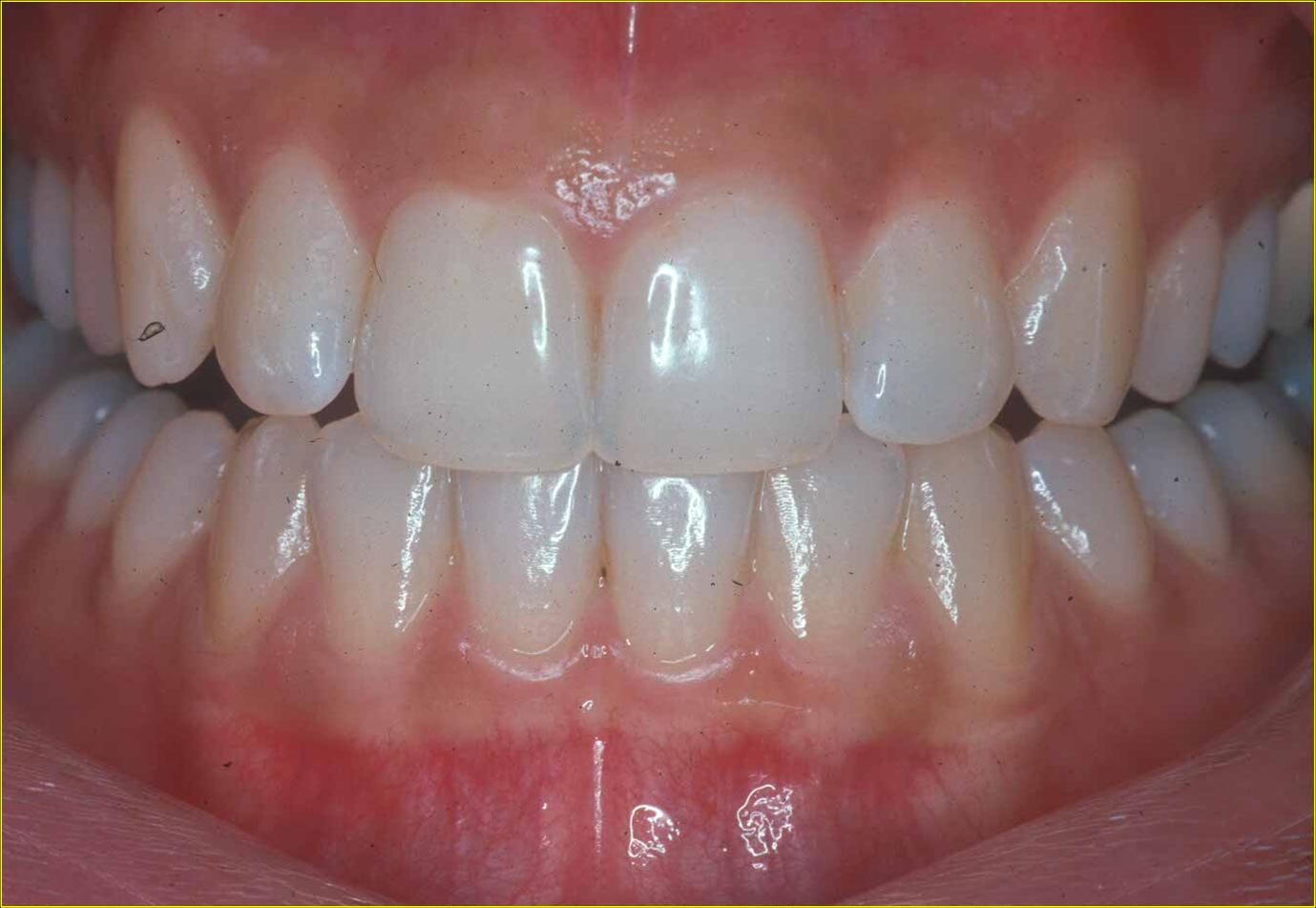 Healthy gums will be a medium pink color at their base, and a pale, coral-pink color towards the tooth. They shouldn’t look swollen – the ridges of your teeth underneath should be slightly visible.

They should hug the teeth tightly, which can be seen in the above image by how the gum smoothly tapers off onto the tooth. Finally, a healthy set of gum will be free of ideally all sores, cuts, and wounds, but concern should especially arise if these sores are random (not from an accident like burning yourself with soup or accidentally stabbing your mouth with a fork).

These are the major visual differences between healthy vs. unhealthy gums, but there are sensory signs that are just as important. Your gums shouldn’t bleed when you touch them, perform your oral care routine, or when getting a standard teeth cleaning. Furthermore, they should feel firm to the touch. While they shouldn’t be swollen, they shouldn’t feel loose on the teeth, either.

The beginning of a set of gums’ fall from health and into disorder is called “gingivitis,” and is essentially gum inflammation around the base of your teeth. Gingivitis is the earliest stage of more advanced gum disease, periodontitis. Below is an image of gingivitis in an earlier stage, when the effects are still reversible: 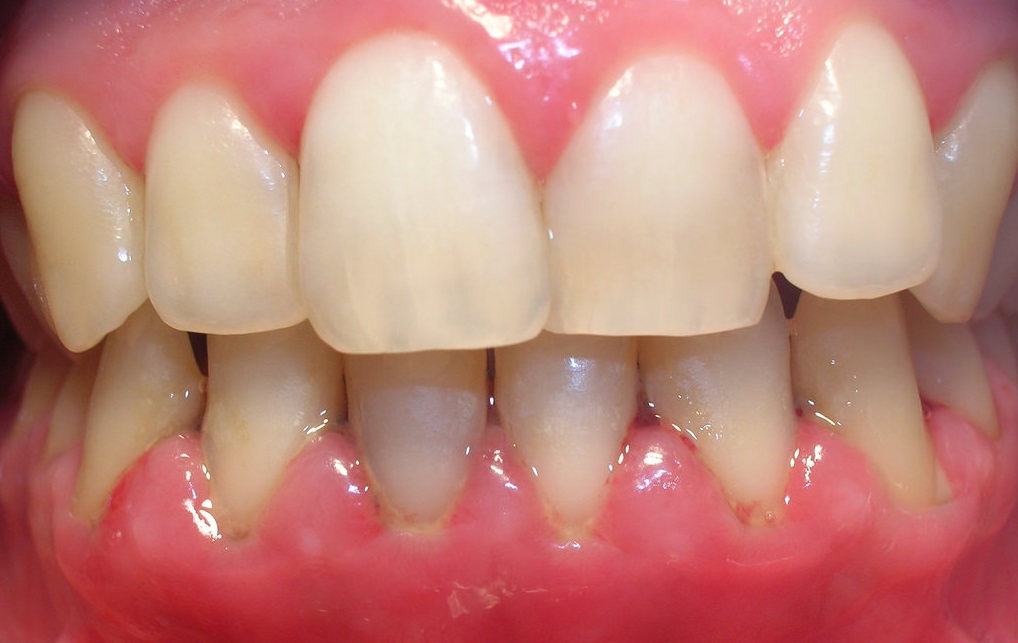 Let this image also serve as a reminder of how important it is to be thorough with your entire oral care routine. You can see that the bottom gums are in worse shape than the top: more swollen, much darker pink, and receding. It’s likely that the top set of teeth and gums received better brush and floss jobs than the bottom.

Back to the signs of gingivitis, though. While the gums in the image are a pink color, they have discoloration and are actually darker than the pale pink of healthy gums.

Towards the bottom of the image and around the teeth, the gums take on an inflamed, red appearance. It’s been suggested in a study that the color change from medium to dark pink can be one of the first signs of gingivitis. Keep in mind that this is a darkening of color from your gums’ normal color.

Furthermore, in the picture of early gingivitis, swelling is visible where the gums meet the teeth. The gums are also starting to recede, which worsens as the gingivitis progresses. This is visible at the base of the bottom teeth where some yellowing on them is exposed. You won’t find your gums continuing to recede one you start properly taking care of them, a process we’ll get into later.

Other non-visual signs of gingivitis include bleeding or pain when you brush or floss your teeth and consistently bad breath. You may also experience sensitivity to cold and hot temperatures. Remember, you don’t have to have all of these symptoms to have gingivitis. Concern is necessary at the sign of any of them to prevent the disease from advancing and its effects becoming non-reversible.

If you’re experiencing symptoms of gingivitis or wondering where you fall on the spectrum of healthy vs. unhealthy gums, our advice to you would be to develop an oral care routine that includes brushing, flossing, and dental visits. If you complete a routine like this regularly and thoroughly (see our Complete Guide to oral care for teeth experiencing gingival symptoms), you should be able to work your way back to strong, healthy gums and protected teeth. If you ignore these symptoms, the mild inflammation of gingivitis will advance into periodontitis, a serious gum infection with potential to permanently damage both your gums and jawbone.

Periodontitis, like gingivitis, starts with plaque build-up. Plaque makes its way into shallow pockets between the gum and tooth which form during early periodontitis. From there, it’s able to continue to build because of the difficulty of reaching those pockets with brushing and flossing. As periodontitis develops, the symptoms of gingivitis worsen and new ones develop:

Here’s an image of gums with periodontitis before the symptoms advance into the loss of gum tissues and jawbone decay: What causes and contributes to unhealthy gums? What can I do to improve gum health?

Maybe you know where you fall on the spectrum of healthy vs. unhealthy gums, but aren’t sure how you got there. It’s likely one of these causes.

We’ve mentioned how the build-up of plaque causes the inflammatory response of gum disease, but how does that plaque develop? The main cause is insufficient oral hygiene, which allows the bacteria of plaque to multiply quickly. A study suggests that the complete removal of plaque once every other day is actually more valuable than insufficiently attempting to remove it every day. This same study also produced evidence of gingival redness developing after 48 hours of plaque being left alone.

Calcified plaque, known as tartar, produces the same effects as regular plaque, but is harder to remove. Tartar will occur if plaque is untreated, and must be removed professionally, making the process of preventing gingivitis more tedious, costly, and potentially painful. Follow a good oral care routine to prevent tartar buildup and save yourself the trouble.

One of the main things you can do for gum and overall oral health is to quit smoking. Periodontitis has been heavily associated with smoking, and tobacco cessation is highly recommended by dental professionals when it comes to a healthy mouth. Smoking reduces your gums’ resistance to harmful bacteria, and can contribute extra to bone loss. Beyond that, smoking can cause sores and inflammation directly on your gums.

Beyond what we’ve already mentioned about a regular oral care routine to keep away plaque, not smoking, and watching your blood sugar, there’s more that you can do to keep your gums healthy.

Incorporate a gentle toothbrush into your oral care routine to avoid brushing the gums too hard and damaging enamel on your teeth. Furthermore, softer bristles are more likely to find their way into the grooves between teeth and gums and remove extra plaque.

When it comes to flossing, consider a water flosser. It’s 129% as effective at removing plaque as string floss, meaning it does an even more thorough job of keeping your mouth clean and your gums healthy. It can also disrupt bacteria deeper into the periodontal pockets than string floss can, and reduce the depths of those pockets in as little as two weeks.

Why should I improve my gum health?

Let’s be real: beyond cosmetic concerns, having teeth is practical! You still want to be able to chew your food, don’t you? If so, you need to take care of your gums. Those receding gums that happen when they loosen from their original attachments on the teeth, eventually lead to tooth loss. In fact, gum disease is the foremost cause of tooth loss in adults.

Gingivitis can easily go untreated, leading to periodontitis, which can go untreated easily. By the time the symptoms get serious, it might be too late to return to a truly healthy set of teeth and gums.